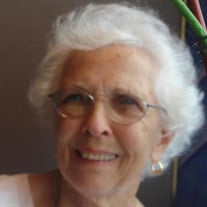 Brenda Moss Platt, 93, passed away on November 17th, 2021 in Columbus, Ohio. Born July 24, 1928 in Rochdale, England, Brenda was preceded in death by her husband of 69 years, Kenneth A Platt, and survived by her children Judith Platt (James) Baker and Kenneth E (Janet) Platt, grandchildren Sarah Baker, Lauren (Steve) Fountas, Colin (Emily) Baker and Spencer (Kristin) Baker, along with great grandchildren Penny and Molly Fountas, Charlotte, Graham, and Margot Baker. Brenda grew up in England during WW II, which is what prompted her to move garbanzo beans from the 1970’s into three different homes. She met Ken at the Carlton dance hall in Rochdale, where the rest of their life began after he asked for the prime spot on her dance card. Brenda then immigrated to Toronto, Canada in 1957, and then to Worthington, Ohio with Ken and their family, where they continued to dance any chance they got. Golf was another one of Brenda’s favorite pastimes, and she ended up scoring two holes in one during her illustrious career. She was also an accomplished knitter and seamstress, often having to tailor clothes to fit her incredibly short self, or making clothes for her grandchildren’s Barbie dolls. On top of that, she was an absolutely exceptional chef and baker - family holiday dinners usually included her specialties; Shepards Pie, rice pudding, cheesecake, and Swedish wafer cookies. Christmas dinners were always at Brenda’s house as well, with her homemade Mincemeat tarts capping off every meal. Brenda never met a stranger, and had an open door and open heart for everyone she met. If you ever came to the Platt’s house, you were offered a sandwich and a beverage before you even sat down. They loved the Buckeyes and watched the PGA tour religiously, regularly putting their grandkids to sleep every Sunday afternoon at their house. Everyone got a hug on their way out the door, and a ‘Night G’Bless” if it was late. After retirement, Brenda and Ken transitioned into their new favorite role of snowbirds, moving to Viera, Florida during those cold winter months, where they could golf year round. Brenda made many new friends in the sunshine, where she continued to golf on their neighborhood course and host with the best of them. They bought a golf cart, which became the best reason for family visits at Christmas, and also didn’t seem to mind 17 people staying in their house. Brenda loved a good glass of white zinfandel with a side of plain Lay’s potato chips, so please raise a glass in her honor, and share a fond memory. In lieu of flowers, the family asks for donations to the Alzheimer’s Association in her memory at alz.org. A private family celebration will take place at a later time. Brenda's family would like to thank the staff of Danbury Senior Living and Capitol City Hospice for their care.

Brenda Moss Platt, 93, passed away on November 17th, 2021 in Columbus, Ohio. Born July 24, 1928 in Rochdale, England, Brenda was preceded in death by her husband of 69 years, Kenneth A Platt, and survived by her children Judith Platt (James)... View Obituary & Service Information

The family of Brenda Moss Platt created this Life Tributes page to make it easy to share your memories.

Send flowers to the Platt family.