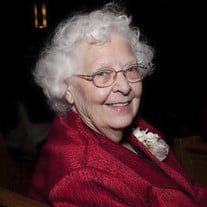 Betty Marie Hay age 89 of Westerville Ohio has gone to be with our Lord on Monday December 21st, 2020 from Brookdale Senior Living of Westerville. Retired from a long career with AT&T/Ohio Bell in 1992. Proceeded in death by Husband Homer Guy... View Obituary & Service Information

The family of Betty Hay created this Life Tributes page to make it easy to share your memories.

Betty Marie Hay age 89 of Westerville Ohio has gone to be with...

Send flowers to the Hay family.