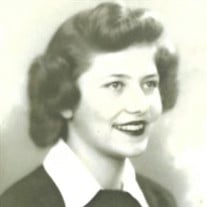 Betty K. Carman, age 95, passed away peacefully on February 20, 2021. She was born on February 18, 1926 in Pittsburgh Pennsylvania. After graduating high school, Betty obtained a Business diploma from Grace Martin School in 1945, and spent several years working as a secretary. Once she had children, she decided she needed to be at home to take care of her family, and became an amazing homemaker. In addition to working at home, she was active in OSU Mother’s Club, Bowling Leagues, Sewing Club and in her church. She also spent time gardening, cooking, knitting, sewing and doing beautiful needlework. She created pieces that are now cherished by her family. Later in life, she would spend time traveling with her husband Sam. They went to all 50 states with their Good Sam’s Camping Clubs and on their own. They really enjoyed this time of their lives and she was very proud of all their adventures. Betty touched many hearts and was loved by her family and many others. She is proceeded in death by her parents, Walter H. & Margaret E Ruehl, and husbands Donald R Croker (married 1949-1973) and Sam G Carman (married 1974-2008). Betty is survived by her brother Edward H. Ruehl (Dorothy). She was a loving Mother and Step-Mother to her 6 children: Yvonne Pruett (David), Pam Dawson, Lou Ann Carman, Kim Croker, Greg Carman (Diana), Jeneanne Carman (Jim Nelson). Betty was a grandmother to: Lisa Lyautey (Paul), Kelly McFall (John), Joshua Tweedy, David Pruett, Megan Filippi (Tom), James Michael Lang, and Madison Holley (Lawrence), as well as a great grandmother to: Kimberly, Devin and Tyler Welsh, JJ and David Tweedy, Ella and Ryan Filippi and Axel Holley. Betty was also an Aunt to Babbie Reagan and Becky Farley (Blaine). An intimate celebration of her life will be held at Rutherford Corbin Funeral Home 515 High Street Worthington, Ohio 43085 on February 26, 2021. Family and Friends will be received from 12:30-1:30pm. Pastor Bonnie Gerber will officiate a service at 1:30pm, with a private burial following at Union Cemetery in Columbus, Ohio. In lieu of flowers, please make donations to The Alzheimer’s Association on her behalf.

The family of Betty K. Carman created this Life Tributes page to make it easy to share your memories.

Send flowers to the Carman family.