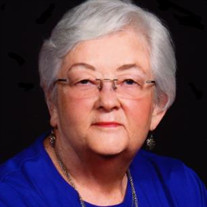 Beryl Comley Danner, 85, of Columbus, Ohio, died on April 3, 2022. Beryl was born on March 7, 1937 to the late Alec Comley and Florrie (Dodson) Comley in Cohoes, New York. She graduated cum laude from the Lucy Webb Hayes School of Nursing and worked in multiple roles as a registered nurse including many years at Mount Carmel of Central Ohio. She was married to her husband, Blake M. Danner, of 35 years from 1960 until his death in 1996. She is preceded in death by her brothers Jack (Alice) Comley, William (Frances) Comley, Albert (Lois) Comley and Robert (Mary) Comley as well as her sister Sallie Mae (John) Imirie. She is survived by her sons Jay (Julie) Danner and Guy Danner (Christy Doran), grandchildren Alec Danner, Max Danner, Griffin Danner-Doran and Oliver Danner-Doran, brother Richard (Patricia) Comley, many nieces, nephews and cousins as well as many, many friends. Beryl was an active member of Linworth United Methodist Church for 50 years (Linworthys, Searchers, Linworth Campers and the Garage Sale, among others). She was a member of the Civitan Club of North Columbus for over 30 years (past president, community garden, Ohio Special Olympics and Park of Roses concerts). She was also an active member of the Westerwood Life Care community (Wii bowling, cards, B-wing social committee and Vespers) Beryl (pronounced BURL) loved her family, her friends and her church dearly. She was a card and board game enthusiast and played for fun–and to win. Many people have told us that she was the first person to welcome them to church, a group or an event and that she did her best to make them feel welcome. She has also been described as a "straight shooter". She was very opinionated and enjoyed sharing her thoughts on things, but she was always open to listening to other perspectives as well. Beryl was a first-generation American. It may have been this and her English ancestry that made her very straight-forward when it came to problem-solving–work hard and get the job done. A memorial service is scheduled for 11:00 am on Saturday, May 21, 2022 at Linworth United Methodist Church in Columbus, Ohio with a private interment in the LUMC Columbarium after the memorial service/reception. In lieu of flowers, contributions can be made in her memory to the General Fund at Linworth United Methodist Church (https://linworthumc.org) or Civitan Club of North Columbus (https://www.northcivitanclub.org). Arrangements by Rutherford-Corbin Funeral Home 515 High Street, Worthington, Ohio. Family will receive friends at Linworth United Methodist Church after the memorial service.

The family of Beryl Comley Danner created this Life Tributes page to make it easy to share your memories.

Send flowers to the Danner family.