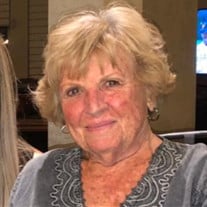 Barbara Ann Kost, age 84, entered her eternal rest with the Lord on October 1, 2021, after a brief battle with heart disease. She was born to Charlene and John Young on November 7,1936, in Columbus Ohio. She graduated from West High School in 1954 and attended Capital University. She then moved to Belpre, Ohio in 1976, where she has resided for over 45 years. Barbara is survived by her son Steven Paul Snyder and daughter Susan Carol Snyder and granddaughters Tessa Leigh Cooper (daughters Nova Leigh Guluzian and Isla Maria Guluzian), Erica Marie Cooper (daughter Remington Leigh Braun), nieces and nephews from the McGrail, Pensyl, Kufrin, Baird, and Caplan families. Barbara is preceeded in death by her first husband Paul Warren Snyder and her second husband Jack Richard Kost who was the love of her life, her brother John Franklin Young and her sister Carolyn June McGrail. Barbara loved her country place and just recently built a home on the property that has been in the family since the Civil War. She would regularly attend to the grave sites at Stukey Cemetery to ensure that all family members buried there had fresh flowers and the proper decorations based on the seasons. She could be found planting and cleaning the many family grave sites regularly throughout the year. She bought new head stones for her great great grandparents, Margarite and Christian Fridley who immigrated from Bern, Switzerland around the Civil War years. She deeply respected her mother and father’s family heritage. Barbara enjoyed a wide array of friendships in both Ohio and the Finger Lakes region. She will be desperately missed at Keuka Lake where she spent her summers entertaining the guests that would always look her up when visiting. Her legacy will live on in the hearts and minds of her good friends and family in Columbus, Belpre and Penn Yan. Barbara also loved her basset hounds Montezuma, Cesar and Gretchen. She donated her time and money to many pet charities. In lieu of flowers, please consider sending donations to either the Humane Society of Parkersburg West Virginia or the Humane Society of Yates County, New York. Visitation hours will be 5:00pm to 7:00pm, Thursday October 7, 2021, with funeral services held at noon on October 8, 2021, both at Rutherford Funeral Home, 515 High Street, Worthington Ohio 43085. There will also be a graveside service after the funeral at 2:00pm at Stukey Cemetery in Fairfield County, Ohio. Immediately following the grave site services, refreshments will be served at the home of Mark Riegle.

Barbara Ann Kost, age 84, entered her eternal rest with the Lord on October 1, 2021, after a brief battle with heart disease. She was born to Charlene and John Young on November 7,1936, in Columbus Ohio. She graduated from West High School in... View Obituary & Service Information

The family of Barbara Kost created this Life Tributes page to make it easy to share your memories.

Send flowers to the Kost family.