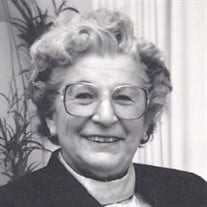 Bennett, Agnes M. (Bever), of Dayton and Dublin, passed away on November 21, 2020 at the age of 97, in Dublin, Ohio. She was born on January 4, 1923 in Somerset, Ohio to the late Lawrence J. Bever and Mary Ellen (Clouse) Bever. Agnes graduated from Holy Trinity High School in 1941. She entered Mt. Carmel Hospital School of Nursing in Columbus, where she received her RN in 1944. She received her B.S.N. at St. Mary of the Springs (Ohio Dominican) in 1947. On June 10, 1947, on a hot, sunny day, Agnes married the love of her life, John (Jack) D. Bennett at Holy Trinity Church. She met Jack through her best friend and Mt. Carmel roommate, Dorothy Bennett, Jack’s sister. Agnes and Dorothy were visiting Dorothy’s Uncle Mac at his jewelry store, University Jewelers, on O.S.U. campus. As fate would have it, Jack just happened to be visiting their uncle too. The three spent the day together at the Neil House. Jack was dressed in his U.S. Army Air Corps uniform and was quite entertaining. Agnes never looked back; completely smitten with him. Agnes and Jack had a beautiful marriage for 53 years (upon his death) built on deep Christian centered values, respect, acceptance, and lots of laughter and humor-filled good times with family and friends. After their wedding, Jack and Agnes moved to Minnesota where Jack started a career with NCR. Agnes, too, began her career as a nurse educator, teaching in various hospitals in Rochester, St. Cloud, and Minneapolis until the birth of Jean in 1956. In April of 1956, Jack and Agnes moved to Dayton, Ohio where Bob was born in 1958. In 1960 they were transferred once again. This time to Omaha, Nebraska where Jack worked for NCR at Offutt AFB/SAC. Agnes remained a stay-at home mom while furthering her education at the University of Nebraska Omaha. She received her M.S.N. in 1968. Another move… back to Dayton, Ohio. Since both of her children were now in school Agnes returned to teaching at various institutions. Her tenure included St. Elizabeth Hospital, Wright State University, Kettering College of Medical Arts, Miami University Hamilton campus, and Sinclair Community College. She continued to live in Dayton until 2002, after the death of Jack in 2000, moving to Dublin to be closer to Jean. Agnes was a parishioner of Holy Angels Church while in Dayton. She became a member of St. Brigid of Kildare Church once in Dublin. Agnes was a devout Catholic attending Mass several times a week in addition to praying the Holy Rosary daily. In addition to her husband, Agnes is preceded in death by her brother Leo Bever and sister-in-law, Frances Bever of Somerset, her sister, Dorothy (Bever) Zorko and brother-in-law Frank Zorko of Cleveland, sister and brother in law, Dorothy(Bennett) Birkimer and Charles Birkimer of Columbus, sister and brother in law Ruth (Bennett) Berry and Warren Berry of Columbus, her brother-in-law Eugene Bennett, and her in-laws Robert and Pauline Bennett all of New Lexington. She is survived by her two children Jean M. Bennett of Dublin and Robert J. (Regina) Bennett of Dallas, Georgia. Five grandchildren; William (Liz) of Danvers ,MA, Sarah (Teri) Bennett of Dayton, Ohio, Dr. Emily (Kris) Hutchins, Janie Horne, and Jack Horne all of Columbus. She had three great grandchildren Avery, Nora, and R.J. Bennett. Agnes is also survived by her “other” daughter Kathy Gierhart and numerous loving nieces and nephews. A special thanks to her nephew, Don Birkimer, for his loving care, support, and guidance not only to his Aunt Agnes but to his cousin Jean. Agnes was a stranger to no one. She was a warm, loving daughter, sister, wife, mother, grandma, great-grandma, aunt, and a faithful friend to many. She loved to play golf and bridge, and travel. Jack and Agnes traveled often, cruising the Panama Canal, touring Italy and Ireland which were some of her favorites. She had perseverance, drive, and intellect yet she was able to balance her life with a carefree attitude allowing her to not sweat the small things in life. She had a witty personality and a clever sense of humor. She was loved by many and will be missed by all. Agnes truly did live a full life. Due to current circumstances a private, Catholic graveside service was officiated by Fr. Stephen Carmody of Holy Trinity Church at the New Lexington Cemetery on December 3 2020 at 1pm. Close family members and several friends attended. In Agnes’ honor and memory donations can be made to Capital City Hospice 2800 Corporate Exchange Dr Suite 170 Columbus, Ohio 43231. They took exceptionally good care of Agnes the last year and a half of her life. Agnes loved nurses. The offering of Holy Mass for the deceased and the repose of one’s soul was always so important to Agnes. I know how meaningful a Mass said in her memory would mean to her. I know she will smile upon all of us from heaven.

Bennett, Agnes M. (Bever), of Dayton and Dublin, passed away on November 21, 2020 at the age of 97, in Dublin, Ohio. She was born on January 4, 1923 in Somerset, Ohio to the late Lawrence J. Bever and Mary Ellen (Clouse) Bever. Agnes graduated... View Obituary & Service Information

The family of Agnes M. Bennett created this Life Tributes page to make it easy to share your memories.

Bennett, Agnes M. (Bever), of Dayton and Dublin, passed away...

Send flowers to the Bennett family.